In my previous article, I looked at What’s so Weird About Quantum Mechanics.

I closed with a quote of Feynman stating that

“Quantum Mechanics is so confusing that I don’t even know if there’s a problem.”

Now I want to move on to discuss why this problem itself is so “problematic”, and why that makes interpretations about what is actually going on in Quantum Mechanics so difficult and controversial. 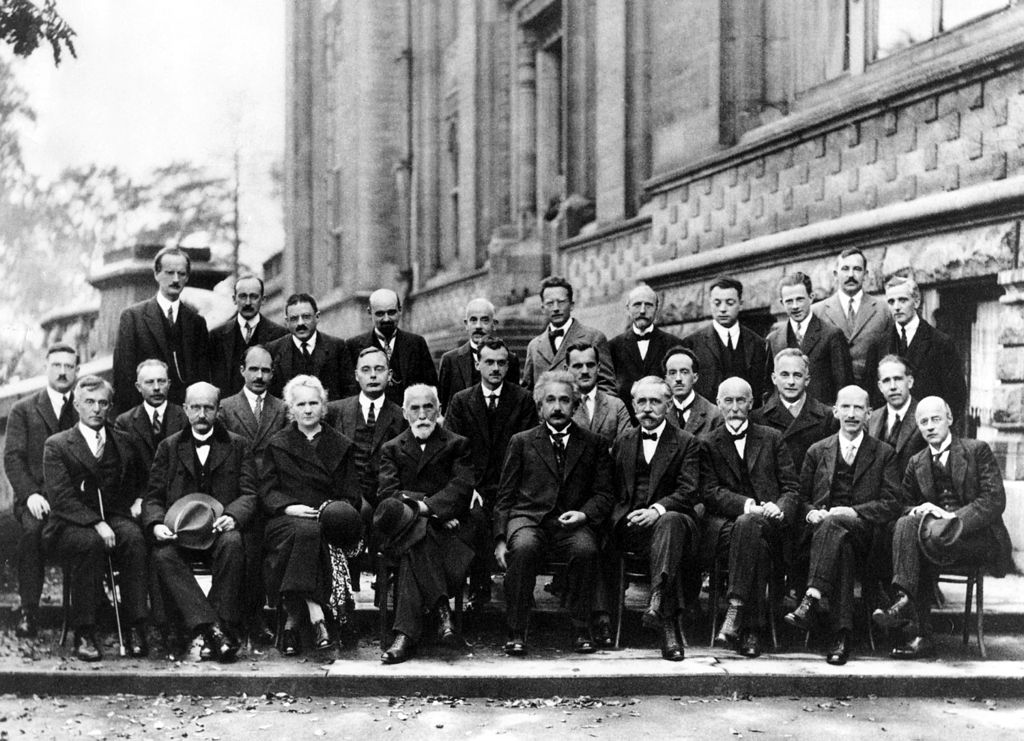 Marie Curie and a couple of guys at the Solvay Conference in Brussels (Credit: Benjamin Couprie [Public domain])

There are many different competing interpretations out on the market, with widespread heterogeneity in the field with regards to who prefers which interpretation up to the highest ranks of researchers.

So the question of interpretation is still very much unsolved, and the discussion is maybe more alive today than it has ever been.

I will focus here on the Many World Interpretations and the Kopenhagen Interpretation, because they differ most clearly in what they say about the world, and the implications about what kind of universe we find ourselves in are pretty mind-boggling. I’m leaving out Bohmian Mechanics, although it’s quite cool, I think a little harder to get. For more info on it, look here.

Further, I will address why it is so tempting to think that consciousness and quantum mechanics are in some way related.

The history of the interpretations of QM is a strange one, and proof that even a community widely believed to be among the most rational and critical on the planet (that is, the community of theoretical physics) is prone to very human flaws like personality cult, politics, dogmatic thinking, etc.

Sean Carroll goes as far as saying that it is an embarrassment for physics of the twentieth century that it stuck so long to an outdated and premature interpretation of QM because pretty much all discussions about interpretations of it were discouraged in the early days.

One striking example of this is how Everett, the mind behind the many-worlds interpretation, was basically driven out of the physics community.

But this story shall not be told here. For those interested, you can start f.e. with David Albert on Sean Carroll’s Mindscape Podcast).

In the rest of this article, I will try to explain as concisely as possible why the weirdness of QM makes interpreting it so hard.

The Standard interpretation of QM for the modern physicists is still pretty much the Kopenhagen interpretation. It’s called Kopenhagen Interpretation because it was worked out by Heisenberg and Bohr in Kopenhagen between 1925 and 1927. It was taught to me in my introductory QM course.

I introduced the concept of a wave function, and of the inherently probabilistic nature of a quantum measurement.

The wave function reflects all we can know about the spin, and therefore incorporates the statistical properties of the measurement into the structure of reality. A spin wave function can be written something like this:

At the conceptual core of the Kopenhagen picture resides the idea of the wave function collapse.

This is the claim that a quantum system (which is every object in the universe) remains somewhat undefined before a measurement of the system, but after the measurement through an observer, it collapses into a more defined state called an eigenstate of an observable.

In the Kopenhagen picture, the observer “reading out” the measurement device is thought of as causing the “collapse” of the wave function. Because after the measurement, we don’t see the statistics but see only up x or down x.

If we start out with the wave function

The problem with this is that it’s awkward to model in the theory.

The observer is not treated as a quantum system, because it has the unique, inexplicable property of causing the collapse of the wave function.

There is no real motivation for this in the formal structure of quantum physics. Why should a mere passive “observer” have this special property?

A possible way out is to start modeling the observer as a quantum system.

As every object in the universe is a quantum system, there is no reason why the measuring device itself should not be one as well. This is actually what one does in the standard quantum measurement called von Neumann measurement.

We write this coupling as a vector product between quantum states (with a bold x), producing a so-called entangled state:

The observer itself is described by a wave function, and so the observer measuring one possible outcome remains part of the larger total state of the system.

The wave function of the system can be written as:

Simply put: if we write +, both branches still exist.

If we write or, the wave function collapses onto one of the possible outcomes of the measurement. Only one outcome is then still real, as stated by the Kopenhagen Interpretation.

If we apply this reasoning to Schrödinger’s Cat, after we open the box there is just one world in which the cat is either dead or alive. If we use the plus sign, the cat is really both alive and dead at the same time. 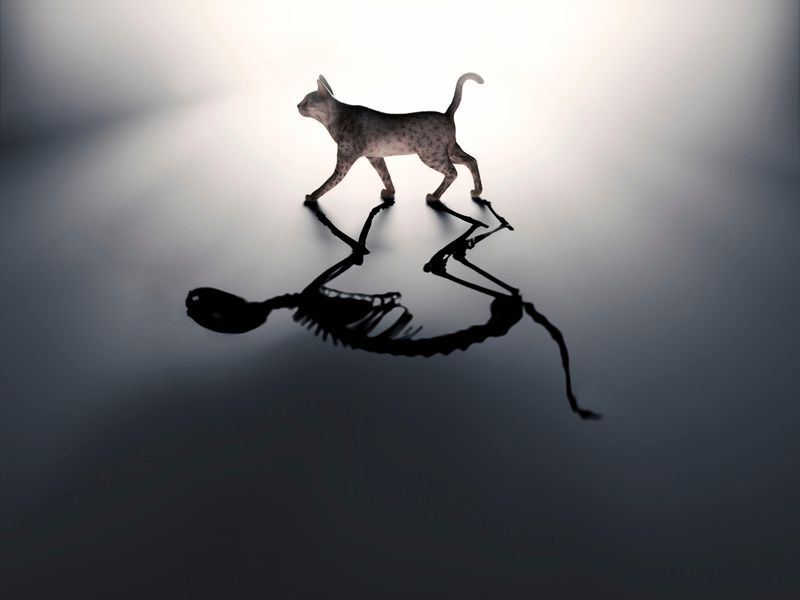 Schrödinger’s Cat, which is famously both dead and alive at the same time. (Credit: ANDRZEJ WOJCICKI/Science Photo Library/Corbis)

Is there more than one world?

Let’s assume we use the + sign. This “branching” comes naturally out of treating the observer itself as a quantum mechanical system. 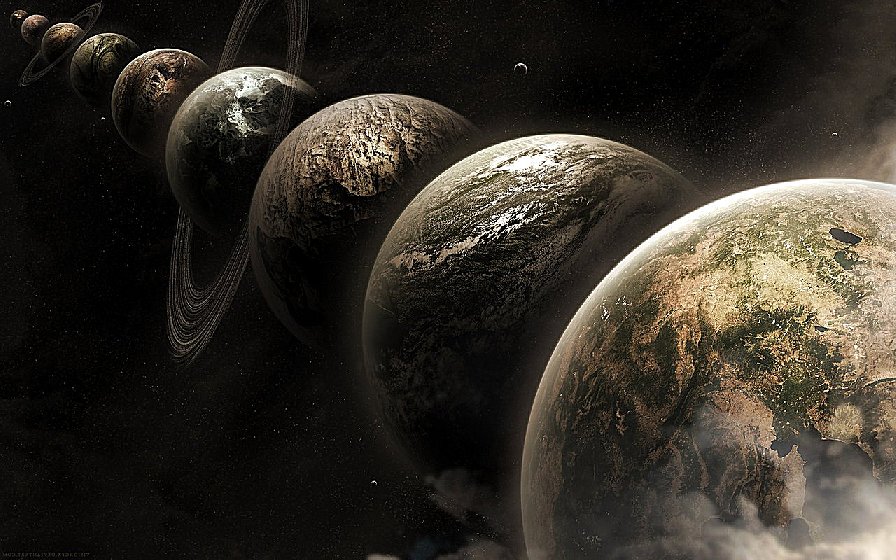 Every “measurement” can be thought of as splitting the world into two almost identical copies (from geek.com, Graham Templeton)

These two worlds from then on develop carry on with their merry existence independently!

If you treat the entire measuring process quantum mechanically, which you don’t have any good reasons not to, then the Many Worlds Interpretationin my opinion arises more naturally out of the mathematics of QM than the Kopenhagen Interpretation, because it doesn’t need to make ad hoque assumptions about the collapse of the wave function.

You might think that such a small thing as the spin of an atom wouldn’t have much influence on the evolution of the world. After all, we don’t see any quantum properties in everyday life.

But one tiny difference can dramatically change everything.

Let me elaborate with a quick thought experiment:

Imagine building a quantum casino, in which you go to gamble on the outcome of spin measurements.

You bet 100 dollars on the outcome of every measurement.

The casino is a non-profit organization, so if you win, you get 200 bucks, if you lose, you get zero.

After gambling for the whole night, let’s say you placed your bets on 100 spin measurements.

But at the same time, if you are a proponent of the Many World Interpretation, you can rest assured that there’s one version of you out there that just had the night of his life, won 10000 bucks, and is getting a new car…and that there’s on version of you that’s in bed crying because he gambled off his daughter’s college fund.

The thing is that not only is this possible in practice (setting up that quantum casino, which could be a cool startup idea), but the implications naturally follow from one of the most prominent interpretations of QM.

I’ll leave you some breathing space to digest this with this picture of stones at a beach. 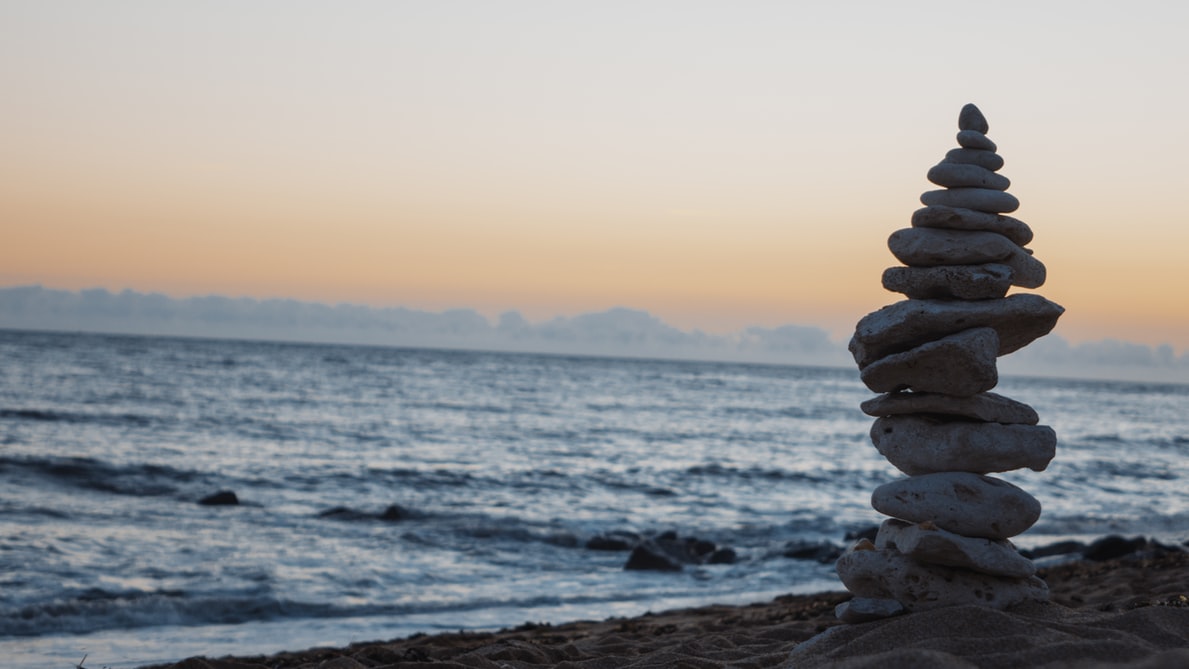 Photo by Thomas Rey on Unsplash

I hope that helped. Let’s get back to business and return to the question of the wave function collapse.

What could cause the collapse of the wave function? What would justify the special treatment of the observer?

People like von Neumann and Wigner put emphasis on the fact that the observer’s subjective perceptions have to be taken into account for a full description of Quantum Mechanics (for a detailed look at von Neumann’s theory, see f.e. here)

This naturally lets one think of a role being played by the ever-elusive consciousness.

The unclear role of consciousness in QM has opened the doors to a lot of pseudoscientific speculation by the likes of Deepak Chopra or the quantum healing community.

I’m not trying to open the Pandora’s box of this debate here.

The question of how QM relates to consciousness is unresolved, but there are more scientifically grounded attempts trying to connect the two (look for example here for the psychophysical interpretation).

Nevertheless, before we don’t have any good theory of consciousness, it is very premature to claim that consciousness has the magic property of collapsing wave functions.

I think a different shift of perspective is more promising.

Quantum Mechanics as a Theory of Information

As already pointed out in my previous article, Epistemology (what we know of the world) and Ontology (what there is) overlap in quantum mechanics, because if we define reality as that which we measure in our quantum measurements, then naturally, reality is affected by our measuring of it.

It’s hard to disentangle our role as measuring subjects from the “objective” reality of things.

For me, the most promising sounding (but not in any way fully and satisfyingly worked out) attempt at reconciling the problems of QM is to conceive of it as a theory of information.

Wheeler coined the phrase “It from Bit” or “It from Qbit”, and Carl Friedrich von Weizsäcker worked on a so-called “Urtheorie”, among many other theoreticians taking up the challenge.

Information could be the basic unit of reality that relates an objective, material, independent aspect of the world with a subjective one, something which proponents of a Neutral Monism have been trying to do for a long time.

It would then be in a sense pointless to speak of an objective world independent of an observer, much in the same way that Kant shows that a perspectiveless look “from nowhere” on the world is a fundamentally inconsistent concept.

Perhaps in this light, our role in interacting with quantum objects could become clearer.

But as you can probably see, it’s not clear at all at this point, which is exciting and frustrating at the same time.

Alas, that’s Quantum Mechanics, and we should probably start getting used to it eventually!

About the Author: Manuel

Particle physicist turned theoretical neuroscientist. Science Communication Manager for ACIT and Branch Manager for Mannheim/Heidelberg. If you are interested in writing a guest article for our blog, reach out via manu.brenn@gmail.com with an idea or a draft and we can work it from there!